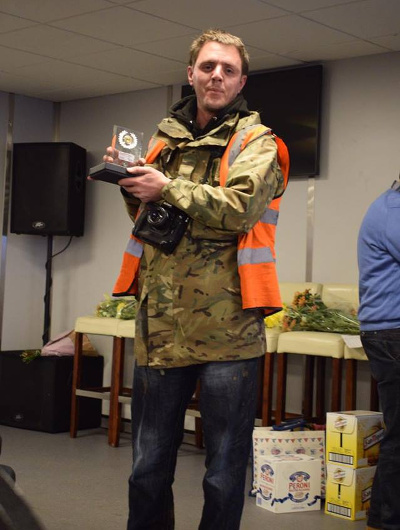 Photo of me by Paige Shelton

In which I love talking about me

Those of you who know me from drifting will not know that my photographic background is in landscape and still photography, often on film. In early 2012, I was looking to broaden the scope of my work, and at the same time I acquired a friend called Natasha. As she knew people on the car scene, I asked her whether she knew anyone that needed photographs of their cars. She mentioned that there was drifting at the Norfolk Arena in King's Lynn, not very far from me. My response was oh, I did not know that was a thing.

Looking back at that, and looking at how photographing my drifty friends is such an important part of my life now, I'm amused at past-me's response to that revelation.

So I showed up on the 11th of March 2012, and oh man. There was the noise, there was the dust, there was the smell, there was the barely-controlled chaos, and I got a passenger ride from Phil Cracknell, and hell yes this is the greatest thing on the planet. Then a massive set of changes in my life in late 2013 meant that I resolved to go to every Norfolk Arena Drift Team day from then on.

I started doing it for fun, and for myself, but things got a little nuts when people learned I was a photographer there, and I started getting snowed under by the volume of messages on Facebook, and so in June 2014 I started a tradition of epic Norfolk Arena Drift Team photo threads on Facebook, from where most of my drifting photos that you see on this site come.

(As much as the word 'epic' is overused, I am not kidding; you should add me on Facebook, or at least stalk me there, and see for yourself on a post-drift evening.)

Some people ask me about technical things. If you don't care, don't start caring now — whatever camera or phone you have is good enough to get great shots (or great video) so go out there and do it! This is just for the people who care.

With that said, none of my equipment is particularly expensive. Here's what currently fills my bag:

Nearly all of my photographs were shot with a 2005 4.1 megapixel Nikon D2Hs. This is an 8-frames-per-second beast that used to sell for about £5000 when it was new, and as of 2016 tends to sell for about £200 on eBay. Of course, I bought it used! I've written about it in much greater length on my other website.

One of my D2Hs's died an unceremonious death on a Norfolk Arena Drift Team day in August 2016 (I'd have made it ceremonious, but I couldn't get a hearse and twenty-one cannons at that kind of short notice). It died early in the day, and upon mentioning to fellow photographer Graham Watkinson that my camera was no longer working, he swiftly escorted me to his car, dug out his Nikon D2X backup body, and I borrowed that for the day. I liked it so much that I bought it, and it now serves as a backup to my second Nikon D2Hs.

Very-low-light shots, such as my photos from Swaffham, were usually shot with a Nikon 50mm f/1.8 AF, which will set you back about £100 new, or £60 used. More recent ones will use the slightly more expensive 50mm f/1.4 D.

The only monster professional lens I've used for any of these photos was a 80-200 f/2.8 AF-D. I found myself almost never using it so I sold it.

In case you missed it: this means that the majority of the photos on my website have been shot on a setup worth about £270, and you can make it cheaper than that if you want. If you like my photography, then go out and use whatever gear you have rather than worrying about cameras!

If you were wondering how this site is built out, the source code is on GitHub with explanation.

A word of thanks

Thank you, Natasha Fuller, for getting me into this mess. I owe you.

Thank you, Chiara Mensa, for giving this site a stunning visual makeover.

Thank you to the drivers in my photos for the fun they give me, the passenger rides, and all the love I have gotten for my photos over the years. I make negative money from all of this; each time one of you shares a photo I took or thanks me for the stuff I do, that alone makes all of the time I have put into doing this worthwhile.

Thanks to the other motorsports photographers from whom I have learned so much. When I started out doing this seriously I spent hour upon hour, day after day, looking through your photos to work out what I was doing wrong and what you were doing right. Shout out to Tom 'Ammo' Harden, Graham Watkinson, Mark Lees, Richard Young, and especially the late, great Mark Callf.

Thanks to Daniel Samuels and Dan Gamble for contributing code improvements.

Finally, perhaps most importantly, thank you to my family at the Norfolk Arena Drift Team, for making this all happen, for supporting and encouraging me and my work over the years, and for giving me photographic opportunities that you simply do not get anywhere else. And in case you didn't know, NADT drift days that are always free for spectators. If you're within reasonable travelling range of King's Lynn or Swaffham there's no reason to not come and see us!

Get in touch with me